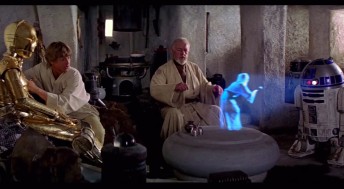 The following is a really great guest post from Eric Anderson .  I asked him to bring the topics of PURPOSE and STAR WARS together for this post and he did a really great job.  Thank you, Eric!

“Help me Obi-Wan Kenobi, you are my only hope.” This line from Star Wars Episode IV: A New Hope, is one of the top 100 lines in the whole history of cinema. Although it was not the first line in the movie, it became the first significant line in a franchise that has impacted millions of individuals, as well as culture as a whole. This line brought an old man out of exile into a conflict which spanned a galaxy. Obi-Wan Kenobi had been in exile for nearly 30 years at this point. He was keeping tabs on a child on a desert planet far from his former apprentice. He did not exactly choose this exile. It came after he experienced a battle with a friend who betrayed him and his friend’s new mentor was just too powerful for the few Jedi that were left, to take down. But this line gave him a renewed purpose.

Purpose is a hard thing for us, right? We often struggle with it. Whether as a college student in a boring job with classes that are overwhelming or a businessman who is traveling to another continent for work or play. We live in a culture that does argue over our origins, regularly. In a world where a view like Han Solo’s claim of “Kid, I’ve flown from one side of the galaxy to the other and I’ve seen a lot of strange stuff, but I’ve never seen anything to make me believe there’s one all-powerful force controlling everything,” I would argue that we should take the side of Obi-Wan. Obi-Wan knew the Force. He had used the Force and responded to it time and time again. For him, it was not a struggle, and it doesn’t need to be one for us, either – even in exile.

The Jews in Babylon knew the feeling of exile. They had been in exile for nearly 70 years. They had sought purpose in the exile and were longing to get out of exile. First, we’ll look at the purpose within exile, then the purpose after exile. There were several prophets that can stand out in this time period. Jeremiah did not go into exile, but he wrote a letter to those in exile which is found in Jeremiah 29. Now normally, people focus on verse 11, but we shall look before that at what he actually told them to do while in exile. Verse 7 tells us: “Also, seek the peace and prosperity of the city to which I have carried you into exile. Pray to the Lord for it because if it prospers, you too will prosper.” He didn’t want them to just carry on in life, but to live missionally within their context. This fits with Jesus’ teachings. He taught us to share our resources with those who have none. Even when God sends you where you do not want to go, He has people there for you to reach. People for you to love, be generous to, and to which you can share Jesus. I doubt that Obi-Wan just sat there while he was on Tatooine. We know he was looking after Luke from a distance and also that Yoda had told him to train in communing with the Force. Did you really think he became a Force Ghost later on by doing nothing on Tatooine?  In Jeremiah 29:12, after telling us He has a future and a hope for us, God says: “Then you will call on me and come and pray to me, and I will listen to you. You will seek me and find me when you seek me with all your heart.” God has a relational and personal purpose for us. Jesus himself said that he calls his disciples “friends” and not just servants (John 15:15). This calling is one that exists both in and out of exile. It never ends and it will continue in eternity.

Exile is never permanent. It is always temporary, even if it feels long. When the 70 years were up, God revealed a particular part of His plan to two different men. One of them was sent to build walls around Jerusalem. Nehemiah felt a calling from God to rebuild the walls around Jerusalem and Ezra felt the calling to build a new temple for worship. They each have their own book in the Bible and I encourage you to read them. It seems that when someone is pulled from exile, throughout scripture they have a role. Paul spends time growing closer to Christ in exile then goes on his missionary journeys after that. Jesus spends forty days fasting in the wilderness and then completes his calling to bring redemption. Obi-Wan’s purpose was to get Luke out of his exile and helping with the rebellion against the Empire. In the newest Star Wars film, we find another person coming out of exile. A girl named Rey. She has been living life as a scavenger on a planet that experienced a huge battle and has many crashed ships on it. She then helps seek Luke Skywalker after enlisting in an army to fight the New Order.

Whatever phase of life you are in, whether you feel exiled to a place you do not like or if you love where you are, God has purpose for you. First of all, for you to enjoy life with Him, and secondly for you to bring His redemption to those around you.

Thank you again, Eric Anderson! And thank you to those that have taken the time to read this blog post.  I pray this one and any others you take the time to read, will bless you and bring increase into your life.  Please help us to reach further and bless more people by sharing this blog with others you know.  Together we can make a difference!